Food for Thought is a review of significant court decisions affecting the food, beverage, dietary supplements and personal care products industry. Although many cases in this edition focus on cases pertaining to class certification, we have also included other cases relating to summary judgment decisions. 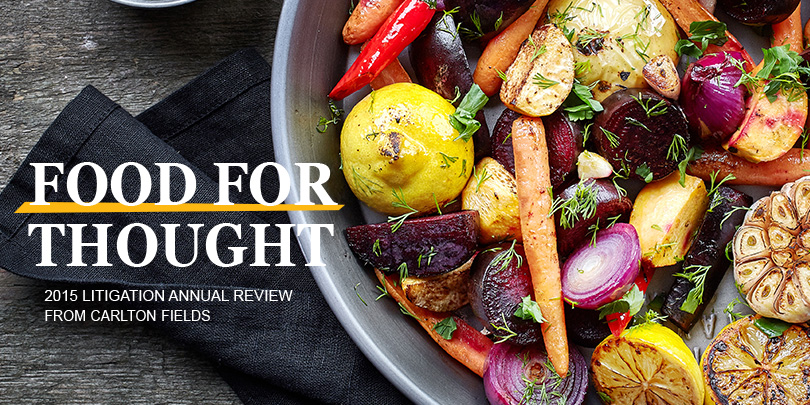 A California district court certified a Rule 23(b)(3) food labeling class action against chocolatier Ghirardelli and approved a proposed settlement.  The genesis of plaintiffs’ claim is that defendant mislabeled its “White Chips” and other products in a way that would mislead consumers into believing that the products contained white chocolate. Plaintiffs also asserted a claim that the “all natural” label was improper because the products contained “genetically modified, hormone-treated . . . or chemically extracted ingredients.” As part of the settlement, Ghirardelli agreed to pay $5.25 million into a common fund and agreed to effect certain labeling changes to all products at issue for a period of three years. The named plaintiffs would each receive a $5,000 incentive payment.  Other class members would receive between $0.75 and $1.50 depending on the products purchased. Class counsel would receive over $1.5 million in attorney’s fees and approximately $87,000 in costs. Continue reading »

Adam Karhu bought a dietary supplement called VPX Meltdown Fat Incinerator (“Meltdown”) in reliance on advertising by Vital Pharmaceuticals, Inc. (VPX) that Meltdown would result in fat loss. Concerned that Meltdown did not in fact result in loss of girth “in all the right places,”1 if at all, Karhu filed a class action suit in the Southern District of Florida alleging that Meltdown’s advertising was false. Karhu’s motion for class certification was denied because he could not show that the class itself could be defined in a precise and manageable way—the base upon which any class action claim is constructed. Continue reading »

The Ninth Circuit vacated a class certification order issued by the Central District of California, finding that common issues did not predominate because plaintiff had failed to demonstrate that the alleged misrepresentation that formed the basis of her suit had been made to all putative class members. Plaintiff alleged that defendant, Supple LLC, violated California’s Unfair Competition Law, California’s False Advertising Law, and California’s Consumer Legal Remedies Act by misrepresenting that its dietary supplement containing glucosamine hydrochloride and chondroitin sulfate “is clinically proven effective in treating joint pain.” In certifying a class of all purchasers of the supplement in the State of California since December 2, 2007, the district court held that the common issue that predominated was whether Supple had misrepresented to the class members that the supplement “is clinically proven effective in treating joint pain.” Supple successfully petitioned for leave to appeal to the Ninth Circuit pursuant to Rule 23(f). Continue reading »

The Eastern District of Missouri certified an unusual class of lawyers and their clients who undertook a collective effort to litigate claims against Bayer related to the purported “contamination” of the U.S. rice supply by Bayer’s genetically modified rice. The defendants are law firms that allegedly benefitted from the work performed by the class in state and federal cases against Bayer. Continue reading »

A panel from the Seventh Circuit split from the Third and Eleventh Circuits and rejected what it described to be a “heightened” ascertainability requirement under Rule 23(b)(3). In Mullins v. Direct Digital, LLC, plaintiff filed a class action complaint alleging that defendant had misrepresented, in marketing materials and on product labels, the purported health benefits of a glucosamine supplement in violation of the Illinois Consumer Fraud and Deceptive Business Practices Act and similar laws in nine other states. In certifying the class, the district court rejected defendant’s argument that plaintiff’s motion for class certification should be denied unless plaintiff could demonstrate a reliable and administratively feasible way to determine class membership and, furthermore, that affidavits from putative class members are insufficient as a matter of law to satisfy this requirement. The Seventh Circuit granted 23(f) review in order to “facilitate the development of the law” on ascertainability, and affirmed the district court’s order certifying the class. Continue reading »

The Southern District of California denied a plaintiff’s motion to remand a putative class action removed pursuant to the Class Action Fairness Act (CAFA), where the plaintiff had alleged that the primary defendant’s product, Chobani yogurt, had become “the best-selling brand of Greek yogurt in the United States”; had annual revenues estimated at $1 billion in 2012; and had “collected tens of millions of dollars” in California alone (as the result of allegedly deceptive sales practices). Notwithstanding those allegations, the plaintiff contested CAFA jurisdiction, primarily by contending that the $5 million aggregate amount-in-controversy requirement was not satisfied. Continue reading »

The Southern District of New York recently denied class certification in a consolidated putative class action against a cosmetics company for breach of contract, false advertising, unfair competition, deceptive acts and practices, and other violations of state law. Plaintiffs alleged the company made false claims regarding its anti-aging products and sought to certify multiple classes of purchases, nationwide and in two states, with additional subclasses based on whether consumers had purchased products online or through sales representatives. Continue reading »

Read All 17 Cases or Download the Magazine: Food for Thought: 2015 Litigation Annual Review

Move Along; Nothing to See in Ninth Circuit’s TCPA Opinion

A blog focused on the latest class action developments and trends by the attorneys of Carlton Fields.